Tuesday December 30, 2008
Sometimes people ask me what my desktop system looks like.  I use the X Window System. 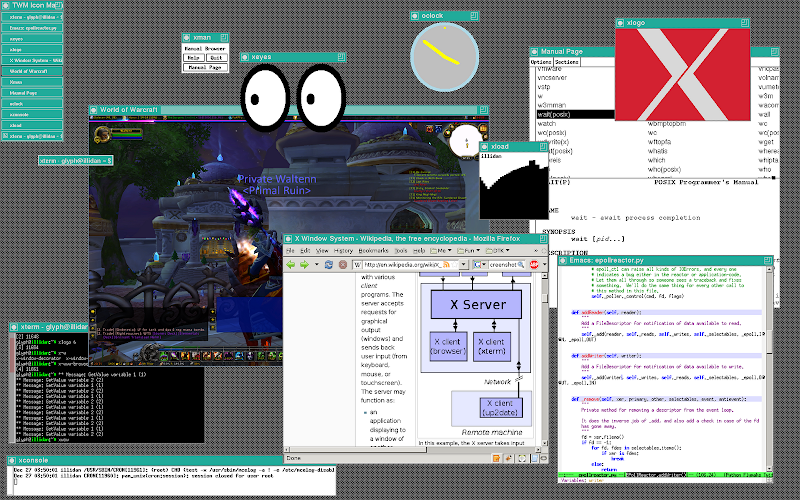 With a sufficiently powerful display adapter, you can also run popular games such as "World of Warcraft" by Blizzard Entertainment.


Okay, that's enough of that.  Please forgive the self-indulgent nostalgia and inside humor — I hope some of you enjoyed it.

To those of you who have no idea what I'm on about: when I was younger, I was really interested in different operating systems and desktop environments, and read a great deal about them.  At the time I was doing this (circa 2000) I was already using a Linux machine, and therefore X windows.  It was a pretty reasonable (if somewhat rough and DIY) desktop environment at the time, but every time i ran across some online publication talking about it, the included picture was some hilariously improbable shot showing TWM, XBiff, XClock, and XLogo.  Inevitably there would inexplicably be an XEyes window as well.  Who would actually run a program that did nothing but display a logo?  Wouldn't a pair of googly eyes following your mouse around be distracting?  Why would you run TWM when you could run WindowMaker?  To go with this improbable screenshot, there was typically a retro blurb explaining that it supported "bit-mapped graphics" and "multiple colors".

These descriptions were written at a time when such things were taken for granted (and not written up in contemporary descriptions of, for example, the BeOS desktop environment).  I suppose the authors were somewhat lazily copying from ancient marketing copy, unable to make sense of the bizarre constellation of window managers and desktop environments surrounding X itself.

Unfortunately most of these pages have since faded from the web, but as an ironic example, Wikipedia still has an article that mentions "raster graphics" and "pointing devices" as well as the traditional screenshot.

Unlike other other systems which throw their history down the memory hole, every major Linux distribution still ships with a recent, up-to-date copy of these archiaic tools.  So, every once in a while, I choose "TWM" from the "sessions" menu in GDM and have a chuckle.  Once cedega allowed me to replace the traditional "xdémineur" with WoW, I realized this screenshot was just begging to be taken.  If you're curious what my desktop actually looks like, here's me switching between windows while writing this article: 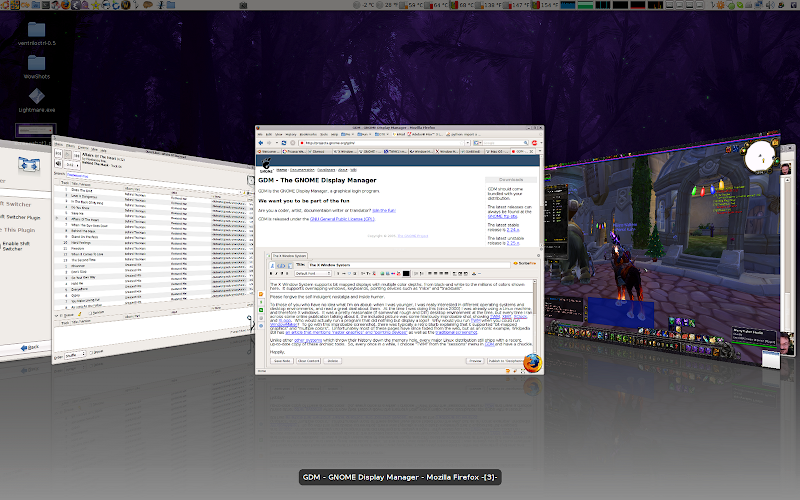 Maybe one day Steve Holden will ask me to participate in "On Your Desktop" and I'll go into a bit more detail.
© Glyph 2022; All Rights Reserved Excepting Those Which Are Not.
See my disclosure statements for information on my interests, financial and otherwise.
Mastodon